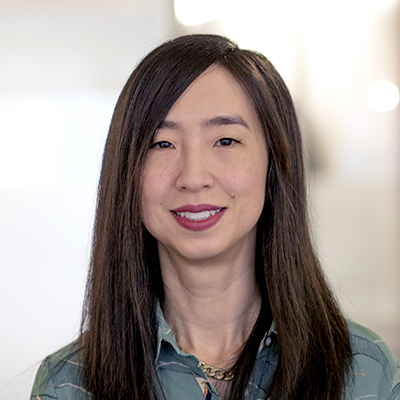 In 1998, Mimi ordered a dancing baby (google “Ally McBeal”) from eBay. To her surprise, it actually showed up in the mail. Thus began her fascination with the internet, and creating connections between online and real-life experiences.

Mimi brings together creative and content strategy to help her clients build relationships with their audiences. She joined Interactive Strategies from GMMB, where she developed multi-year campaigns for AmeriCorps, Communities In Schools, and state health exchanges.

Previously, Mimi was at Threespot, a cause-based digital agency. As a senior writer, she helped the National Park Service, UNICEF, and the Robert Wood Johnson Foundation reimagine their brands online—raising donations and voices of support. She also spent seven years as a copywriter at Arnold Worldwide, crafting national ad campaigns that drove record bookings for Amtrak and Choice Hotels.

In her downtime, Mimi enjoys watching trashy reality TV, discovering cheap eats, and testing the limits of the speakers in her Civic.